January 2017
No Spend Month
How our family is spending as little as possible this month.

We are spending $20 a week on food, fun, and frivolities.We're using up what we have, buying a few essentials, and living well.

Read about the overall challenge and Week One here, Week Three here, and Week Four and Final here. 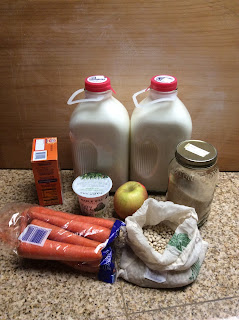 Dried navy beans to make my grandmother's Boston Baked Beans.
Organic sugar (bulk jar) for making water kefir.
An extra 1/2 gallon of milk to make yogurt for the girls (and a small container of yogurt to use as a starter - see below.)
Baking soda (sodium bicarbonate.)
An extra apple to add to the few leftover from last week.
2lb bag of carrots.
Another jar of bulk peanut butter (not pictured.)
I traded a few bottles of our water kefir for a couple jars of soup and a homemade cornbread mix.

Because I went over budget last week (only by $.84 but I like to be precise) I wanted to take that extra out of this week's money.

It also means, because I undershot, I'll have an extra $1.22 to spend next week.

If we were raising our girls 80 years ago, every one of those pennies would make a difference. Going over budget by a dollar might not have been an option. As our country heads into dark times, carrying forward some of the skills of people who've been through tough times can help lift us to lighter days. 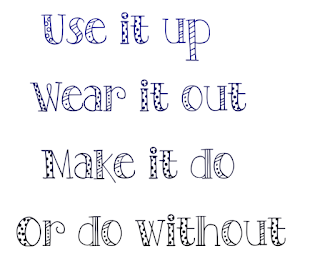 We had a much quieter week than last, and really got into the groove of making all our meals at home. I found my own mentality shifting away from longing for the convenience of eating out, to spending more time meal planning and preparing meals and ingredients in advance.

We turned down an opportunity to eat out on someone else's dime. We explained that the point wasn't to spend someone else's money instead of our own. In another conversation we did reassure a few that we weren't doing this out of necessity. There's no financial crisis.  Rather we are doing this to learn how to use our resources more wisely, to cut through the odd stuff at the back of the cupboards and freezers, and to give ourselves a healthy jump start to the year.

Panna Cotta
I bought an extra 1/2 gallon of milk and a small cup of yogurt to make yogurt for the girls.

They've been drinking milk kefir in the mornings and as a quick snack for some time. We make our own water kefir. While some day I may get into making milk kefir (milk kefir has a lot more benefits than yogurt), buying milk kefir grains and starting a whole new culture to keep up isn't on the list at present.

I bought the ingredients to make yogurt.
Using my own recipe for yogurt in the crock pot, I set to work. 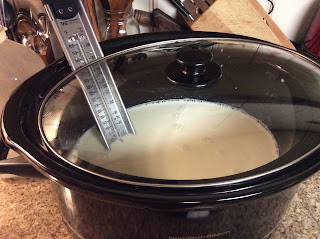 It's a new crock pot and I admit, I wasn't really paying attention.

Instead of waiting for the following morning (like I should have) I excitedly started it in the afternoon. After more than three hours, the milk still wasn't up to temperature so I impatiently turned it off.

I lost track of time and it cooled down too much before I put the finished yogurt (starter) in.

Instead of warming the starter slowly (as per my own instructions) I just stirred it into the crock, and covered the whole thing with towels.

As you might be figuring out, it didn't make yogurt.

Not wanting to waste milk that I was counting on for the girls, I quickly dissolved some gelatin and turned the whole crock into individual jars of Panna Cotta (milk jello).

The girls happily ate panna cotta for snacks for a couple days. I then started warming it up (the same as I'd been warming the plain milk) in the morning so they could drink them out of jars with EcoJarz lids and straws.

Rather than making another attempt at making yogurt, I went straight to mixing gelatin into their warm milk in the morning. Once the weather warms up and something cool to eat first thing is more appealing, I'll try making yogurt again, or perhaps graduate to making milk kefir. For now, we will stick with something easy, warm, and densely nutritious to fill little bellies first thing.

One of the few things I learned from trying out one of the many meal delivery services where you cook it yourself (review coming soon), was a version of the olive spread from a muffaletta sandwich -  a traditional Italian sandwich with layers of meats, cheeses, and a olive and pickled vegetable tapenade-like spread. 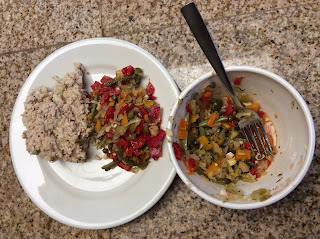 One day while searching for a vegetable idea that didn't involve frozen greens from our farm share this summer, I decided to chop up a lot of the different pickled and fermented vegetables crowding the back of our refrigerator.

With a drizzle of olive oil and some of the marinade from the roasted red peppers, it was a beautifully delicious salad! 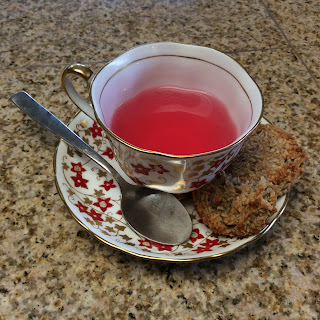 Using up ingredients from the pantry cupboard and the deep freezer, I came across a couple bags of frozen bananas I put up in July.

Mashing them together with dried (unsweetened) coconut, I made some simple banana macaroon cookies. So yummy!

Cutting our food budget down to the essentials and what we already have means planning ahead, choosing nutrient-dense foods, cutting out prepared foods, and making everything from scratch.

While I'm spending a lot more time planning, preparing, and repurposing, I'm spending a lot less time shopping. I know I'm getting food we will eat and enjoy. There's absolute certainty that I'm using our money wisely and not spending money that should be going toward something else.

While this level of cutting back won't be sustainable once we've gone through our stores, it is drastically highlighting what we need, what we enjoy, and what helps us thrive.

One thing that took me by surprise is how little push-back there has been from the girls. Not only have they taken the changes in stride, it seems as though they've hardly noticed. We have talked about it with them, we've run out of things they had regularly. Snacks I counted on when in a hurry were specific foods that I counted on having, not them.

In many cases favorite foods have run out unnoticed, or dismissed with a simple "we don't have any" and seamlessly replaced with something we do have. We do try to eat seasonally so there is a normal rotation to our eating, but I braced myself for a bit more explaining.

Based on my past experiences, I did expect a level of pride in doing something difficult. This has been far more rewarding than I'd anticipated. Not only are we saving a great deal of money by using what we've already bought, we're clearing out the odd bits, using our resources wisely, and learning so much about how we use food.

Based on what we have left, I've created a meal pan for the second half of January, knowing there are a couple of holes that still need to be filled. I have never felt more grateful knowing that there are people who don't even know where their next meal will come from, never mind have the luxury of having a few weeks worth of food on hand and money in the bank to buy more. 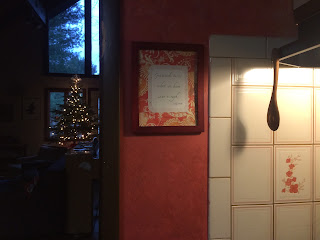 Email ThisBlogThis!Share to TwitterShare to FacebookShare to Pinterest
Labels: Food for Thought, Happy in the kitchen, MonthlyChallenge, No Spend Month, tips, Zero Waste