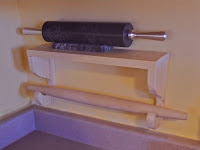 Ages ago I saw an old timey spice rack with curved wood hooks at the bottom to hold a rolling pin. I loved the idea and was determined to make my own. As I have both a marble and a wooden french pastry rolling pin, I decided a flat shelf on the top would best suit my needs. 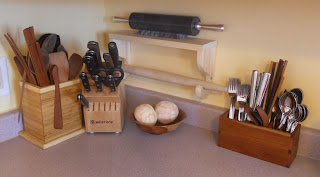 Now I can keep my counters clear, use up harder to reach space in the corner and enjoy the beauty of these tools while keeping them close at hand.

Fixing up my studio - fun with power tools

So we all know I like to make things with hand tools. More recently, I have challenged myself to use some bigger and scarier things - like my dear husband's new table saw.

Since we moved in, I have VERY slowly been turning my upstairs studio space into something usable. Paint went on the walls quickly but it took me a long time to get through the mountains of junk and general detritus from past lives. More recently, with my uber-purge skills still fresh, I tackled my studio. 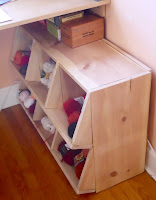 I've daydreamed about putting built-in cubbys into one of the unused walls under the eaves. And that may still happen someday.

I was so excited when I saw these vegetable bins, because I knew that I could make them myself!

Of course, I didn't actually follow the recipe, ehem, I mean plans, and added my own touches.

My yarn stash is now happily tucked under my newly revamped desk, instead of hidden away out of sight in boxes and bags.

I'm so proud of my first major building project and other than a table-saw lesson, built entirely by yours truly. 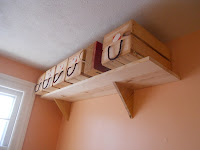 Above my desk my dear husband put up a beautiful shelf.

I've had these small apple crates for years. While sorting and organizing (and downsizing) my craft supplies, these boxes were a life saver. Rope handles, fabric lining, and photo corners with new labels make these bins a joy to use.

Email ThisBlogThis!Share to TwitterShare to FacebookShare to Pinterest
Labels: Getting Crafty 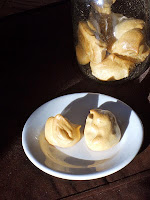 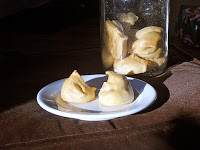 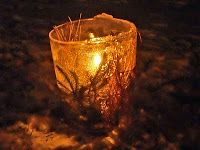 Shorter days and longer nights make me long for sunshine. On precious sunny days I find myself rotating with the sunny spots to take advantage of the warmth and light. 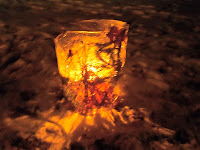 In the evenings we have candle-lit suppers and softly-lit quiet evenings, when we are blessed to have time at home. We are finding our own rhythm and it is wonderful to get to be together. 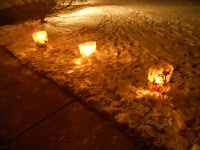 Many cultures have solstice celebrations and festivals of light, mirroring the internal light I can feel brightening within myself.  I want to insulate myself from the world, curl up within and prepare for new beginnings to come. 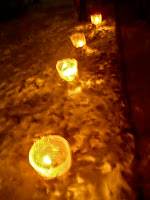 Inspired by another blogger, on Christmas eve-eve we made our own ice lanterns.

These simple creations were a joy to make and were overwhelmingly beautiful. This year I have been craving traditions of our own. I hope that these will become a yearly source of joy and beauty to help us light our way through the darkness.