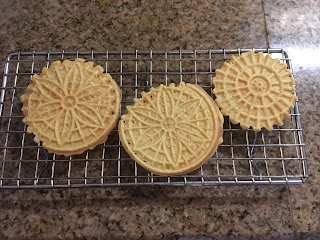 So, there's a lot of reasons to be angry about the government shutdown, but I'm not going to get into them. What I am going to get into is gushing a bit about some of the marvelous things we've been making from scratch.

We've done No Spend Months in January for the past few years. This one kind of snuck up on us by accident. With the government shutdown, HandsomeJoe is out of work - NOT getting paid. He will, most likely, get paid back eventually but not in time for bills...

Lucky for us we've got quite a bit of food put by, the normal milpay mess ups are working in our favor this time by coming in late - just when we need them. We're greasing our elbows and getting creative in the kitchen.

Here are some of the delectable things we've made from scratch:

Einkorn Pizzelles - from my basic toss-it-all-in-until-it-looks-right eggy pancake batter (VIDEO below!)
Greek Salad Dressing (based VERY loosely on this recipe)
Einkorn Drop Biscuits
Homemade Boston Baked Beans (from a can of navy beans)
Einkorn Crepes
Crock Pot BBQ Pulled Pork (put a jar of applesauce in with the sauce, trust me!)
No-knead-slow-rise artisan crusty bread (you bake it in a dutch oven!)
Our own gummy snacks
Borscht (Polina-Soup, as we call it)
Homemade pinto refried beans (from dried beans)
Shredded chicken burritos
Ham and onion quiche in homemade einkorn crust
Lots of whole roasted chickens (we get a bunch at a time)
Tuna Pasta Salad (we make it with canned salmon but "salmon salad" isn't the equivilent)
Lots of soft boiled eggs and french omelets
Loaded veggie pizza
All the things I'm forgetting and more to come!

Here's a little video of me making pizzelle - watch all the way through for all the adorable commentary from girls eating pizzelle off camera.

What are your go-to meals that use whatever you've got on hand?
-