February 6th - Welcome to day 6 of the Myrrhmade Love Where You Are Challenge! 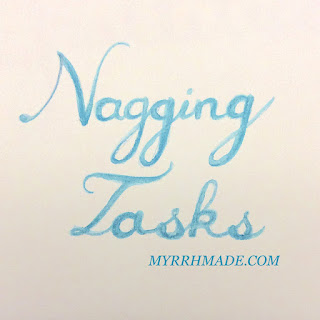 Come on in and join us! 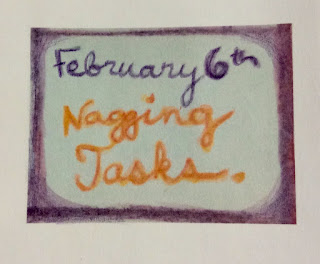 What's a Nagging Task? How is it different from an Energy Drain?

While some Nagging Tasks do drain our energy, I consider Nagging Tasks to be small things such as repairs that may only need to be done once or once in a great while. They're often easy to ignore and get pushed back longer than they should - such as replacing batteries in the smoke detectors or other things that get moved from one to do list to the next.

That pile of papers on the corner of the kitchen island, that loose screw on the toilet paper holder, that thing that needs to be taken to the garage.

Daily Challenge: Make a list of nagging tasks and then set a timer and see how many you can get done.

You might be surprised at how many things you can get done in five minutes, or twenty.

If you can't get a task done, move it a step or two closer to completion, and move on to the next task.

If you don't even know how to start, how can you learn what to do next?

When I was trying to figure out if I could handle our recent plumbing issue, I didn't know enough about plumbing to be able to tell if I could do it. I then went and learned more about plumbing. I tried a few things that were suggested in multiple places (such as removing the bathtub overflow cover, 2 screws, and snaking the drain from there) but to no avail. Having never called a plumber before, I asked neighbors for recommendations. I left some messages. Eventually got through to a place that was booking out into March but they referred me to someone who was able to come the following day and within 45minutes we were back up in business. Putting one foot in front of the other.

Sometimes all you need to figure out is the next step.

Daily Mindset Mantra: Important but not urgent is a higher priority than urgent but not important.

According to Eisenhower's Principle (yes, the former president), there is a simple (though not necessarily not easy) way of organizing your tasks:

2.) Important but not urgent.

3.) Urgent but not important.

4.) Neither urgent nor imporant.

Giving more value to the projects and tasks that will improve your own enjoyment of your life will heighten your ability to Love Where You Are, even if they're not the squeakiest wheel.

For those of us who have to interact with other human beings, you likely have experienced a conflict around where a given activity falls on this scale. Take the time to take care of nagging tasks that rank higher on your own scale and pay it forward for yourself.

Bonus task: Schedule a timeslot or two into your calendar to tackle these sorts of projects - you might be surprised at how many small improvements you can make in just an hour once a week. Putting it in your calendar and showing up for yourself makes a huge difference over time.

To move a mountain you begin by carrying away small stones. (Paraphrase of a saying often misattributed to Confucius)

I decided to challenge myself to see how many of these little tasks I could get done, without stressing.

Here's what I did: 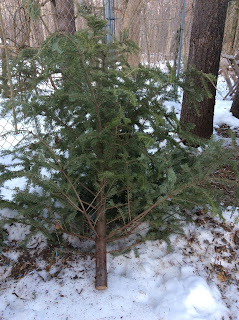 1.) I took down the Christmas tree (I find it depressing because our tree is magic.)

2.) I tossed it in the chicken yard (they eat some of it and play on the rest.)

3.) Put the scraps of drywall from fixing the wall and replacing the bedroom door in the garage.

5.) Put a wall sinker in behind the top toilet paper holder screw to stop it from wobbling.

7.) Put the bag of birdseed out in the bin on the porch and got it out of the diningroom area.

8.) Packed up all the books from our book advent calendar.

9.) Put the decorations bin into its spot in the garage.

10.) Found stitch markers for C's school project (they were too small so I made some out of scraps of yarn.)

Since most of these are things that aren't there any more, they're pretty hard to photograph. 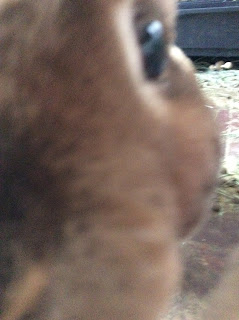 So here's a picture of a bunny trying to figure out what the heck I'm doing.

Make sure to check back here tomorrow for the next challenge, the next tips, and the next dose of the Myrrhmade Love Where You Are Challenge.

Email ThisBlogThis!Share to TwitterShare to FacebookShare to Pinterest
Labels: Food for Thought, Love Where You Are Challenge, Mindset