Make Crummy Stuff - You have to start where you are. 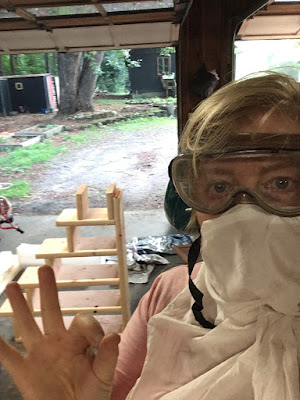 This is a picture of me building the steps for my loft. Right at the top, you can see the extra piece I had to add because I miscalculated. Also, the steps totally didn't work. I had to add wider treads on top of this structure to use them easily.

Have you ever thought about how we learn to walk or watched someone playing a video game where they fall down or lose their character over and over and over but keep going, they keep trying?

It's easy to get caught up in seeing someone else's highlight reel, particularly on social media. It's easy to see someone's expertise and compare your own abilities to theirs.

I'm here to tell you, if you want to make great things, you have to start where you are.

I had some ladies from school stay in my spare room for a handful of weeks last summer while HandsomeJoe was out of town. One of them asked me how I learned to cook so well. I told her honestly that I had made a lot of really awful food.

Even now, I'm getting pretty good at turning my foodie-failures into things that my kids will actually eat. It's pretty simple to turn failures into muffins or pancakes, and if it's really awful, I let the chickens turn it into eggs.

So often I see people try a thing, think they've failed, and give up. Making things is rarely talent and almost always skill. Those who are thought of as "talented" have often worked the hardest or the longest to be so.

Talent is innate. Skill is learned.

If someone else can learn something, so can you.

I'm going to let you in on a little secret. There's almost nothing I can do that you couldn't do if you were to spend as long as I have practicing, falling down, getting up, trying again. Granted you might not want to spend that time and in a lot of cases, you have other things you'd enjoy more.

Going through old papers, I shredded my first attempts at my calligraphy project for school. So here's one of my second round of attempts. 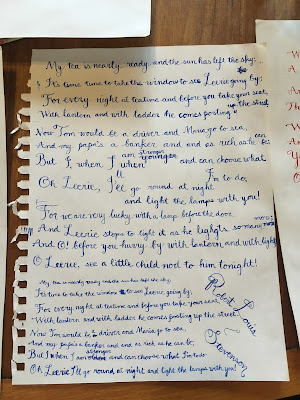 If I hadn't done this (above) I wouldn't have posted about my middle attempts. And I certainly couldn't have done these: 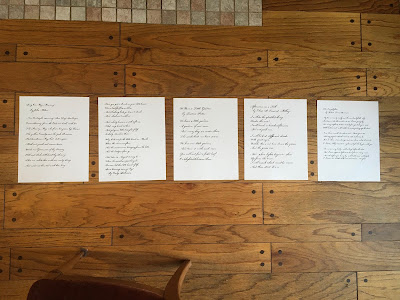 You have to start with crummy stuff.
So often we don't photograph or even clearly remember where we started. I can't tell you the number of home-improvement projects where we get a whole chunk done and then wish we'd taken before pictures. We've lived in our house for almost five years now. Looking back at pictures from when we first moved in and with each major improvement, it's almost hard to remember how things used to be.
If you think of your favorite podcaster, artist, role-model, they started without the skills for which they're known. As it’s been said, even Julia Child wasn’t always Julia Child (Julie and Julia, 2009)
Is there something you've been itching to learn? Something you think it would be so neat to be able to do? What interest have you been trying to ignore?
What small step could you take toward accumulating the skills to do that thing?
It all adds up. But first, you have to make crummy stuff.
Posted by Myrrh Brooks at 9:10 PM

Email ThisBlogThis!Share to TwitterShare to FacebookShare to Pinterest
Labels: Arts, Food for Thought, Getting Crafty, Happy in the kitchen, Mindset, tips