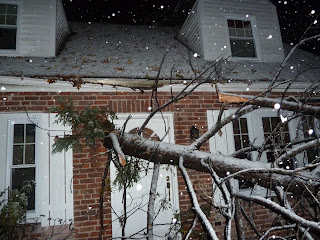 Joe arrived home the following afternoon to no power and a clear front door,
thanks to the marvelous Ben!
The night after that I arrived home with some supplies from where I had been ( where they still mostly had power). I started up the charcoal grill and stewed and steamed us up a warm supper. Thank goodness for cast iron pans!
As I cooked Ben once again came to our rescue and connected the chimney pieces I'd brought home for the woodstove we'd bought and brought home a week or so before the storm. (How is that for providence!)
With the woodstove and a small generator my mum found for us mid-week we made it through the full week without electricity with very little loss or even hardship. I am so thankful for the preparation we did for the hurricane (that we didn't end up needing then) and for the extra measures preparedness measures we now have.
Living without electricity for a week definitely simplified life and allowed us to really spend time together. Our routines and life during that week evoked daydreams of frontier living and lent a satisfaction, sense of accomplishment, and hardiness we both crave in our normally-electric lives. While we were relieved when we finally had power again, there was a bit of sadness at the return to the hectic higher-speed life of modern conveniences.
I hope you all made it through the storm even half as well as we did!
-
Posted by Myrrh Brooks at 8:19 PM